Payton’s 7th birthday was on a Tuesday. We celebrated it by going camping the weekend before. During this camping trip, we noticed he had been keeping his head slightly tilted to the left. At first I thought it was just him being his quirky self, or possibly a habit.

A couple of weeks later, Payton, Maddi, and I were in PetSmart looking for things for our new chihuahua puppy. As we were walking over to look at the fish and birds, Payton fell. He fell hard, right on his face. It was like he didn’t know it was coming, or he wasn’t able to catch himself. He cried, which was rare for him to do if he fell or ran into something; he was a tough kid.

A week later it was the first day of school. I took “First Day of School” pictures on ths front porch, as I did every year. This year, I remember telling Payton to “stand up straight buddy, hold your head up straight”, but he said he couldn’t. I gave my husband the “did you hear that?” look.

On a nice weekend day, a couple of weeks later, we were at my mom’s house. The kids were all playing in the yard. My brother had brought his rambunctious dog over, who Payton loved. As my mom and I talked on the porch, we heard someone crying. Looking down the hill we saw it was Payton, he was on the ground. My brother’s girlfriend, Kaylee, was down there with him. We all thought the dog had knocked him down, but Kaylee said “No, he just fell out of nowhere.” I told my mom about the day in Petsmart and a few other times he’d fallen. I remember telling her, “He’s been falling a lot lately, and this head tilt thing he’s got going on…I wonder if he has an inner ear infection.” She agreed it seemed like he had an inner ear infection and I decided I’d make him a doctor’s appointment Monday morning.

The doctor’s was able to see Payton Monday after school. I told Dr. Barb what had been going on. Payton was being a goofball the whole visit. Dr. Barb had a look on her face, which to me resembled confusion, as I told her my mom-given-diagnosis. Payton jumped off the table and put his arms straight out in front of him and his head down, but looking up with his eyes, as he walked, saying “I’m a zommmmbie”, in this silly deep voice. Dr. Barb now looked concerned, and asked him to do it again. He did, and she pointed out to me what I had already noticed as soon as he did it again, one arm was higher than the other. She had him do sone tests in the hall such as walking, running, and an eye test. Back in the room, she told me she was going to call and get an urgent MRI scheduled. I was confused…I didn’t know what all of this meant…an MRI…I tried to calm myself by telling my mind it was all just precautionary, nothing to worry about. But I was worried. I knew they wanted to look at his brain. The brain is an essential organ. Please dear Lord don’t let anything be wrong with my son’s brain.

I got the phone call for the scheduled MRI later that night. “Wow, that was fast.”, I thought when I answered. They had scheduled the MRI for the very next day. I remember telling my mom and husband that I was scared. Why would they schedule it so quickly. I was terrified that something serious could be wrong with our baby.

When we got to Helen Devos Children’s Hospital, we saw a neurologist. He asked us many questions. His questions scared me. I cried answering some of them. I told him I was scared. He told us, “I don’t want to tell you not to be afraid.”. We asked him if he thought something serious was going on and he told us it was possible. Payton goofed around the whole appointment, full of energy, loving the electric powered doctor table.

We were then taken to a hospital room. The nurses and child life specialists were wonderful. We got Payton ready for his MRI, by dressing him in hospital jammies, which he loved. We decided to try the MRI without sedation since they told us he could watch a movie during it. While we waited, I cried, and prayed. I was a wreck. Jason was a wreck. Payton did great though.

That evening, around 7pm a man (I don’t know who he was), came and asked to talk to Jason and I, alone. While a nurse sat with Payton, we followed him to a tiny room which barely held a table and 3 chairs. The look on his face was not good. As we stared him down for what felt like 15 minutes, he finally said, “They found a large mass on Payton’s brain.” I felt cold rush over my entire body, my teeth felt like the clentch of them held a lock and key. Jason let out a gasp as his hands slammed down on the table, and his posture went limp. I looked down at the table, waiting for this man to give us the good news. Jason finally managed to ask, “Well, how big is it?”. The man said, barely able to look at us, in a very serious tone, “It’s big”. Jason and I just wanted to go be with our son. The man told us we would have more information tomorrow.

We had to wait until the following day to get the full results from the MRI. I called and asked my mom and sister to come down. They did, of course. Payton was having fun, playing Wii games and eating pie. He was on top of the world. We were devastated. Looking at this healthy child in the bed, we couldn’t wrap our heads around it. I told Jason to stay calm, that they could probably remove it. I knew we probably had a long road ahead of us, and I was afraid too, but I didn’t want to scare Payton. Neither of us slept that night.

Tuesday came, and we were anxious. About mid-day, 4 people came in Payton’s room. 2 looked like doctors, the others a social worker and nurse. They asked if the child life specialists could take Payton to play for a bit. We agreed.

Dr. Axtell was the oncologist. He spoke first. He said a lot of words that we did not understand, but the words we did understand were “inoperable”, “tumor”, “fatal”, “radiation”, “no treatment”, “no cure”, “1% survival rate”, and “no progress with research in 40 years”. He told us this was the worst kind of brain tumor to get. I screamed aloud at God , as I sat on Payton’s hospital bed, right there in front of those strangers. I wailed. When I finally gained a bit of composure, I asked the question…THE question, “How long does he have?”. The doctor replied, “We cannot say for sure, because each case is different, but approximately 2-3 months without radiation, or possibly 9-12 months with radiation treatments”. My heart turned into mush at that point. Months?? Did I really just hear that right? I thought he would say our child wouldn’t see 30, or 40 years old, and that was bad enough. He was saying our child probably wouldn’t see 2nd grade? I wanted my baby, I couldn’t spend another second away from my son who’s life had just been given a short expiration date.

That afternoon, more family arrived. Some came bearing gifts. One gift was a set of 4 puzzles. I asked Payton if he would like to put one together. He said, “No! I want to put them all together!”. He had a certain order he wanted to put them together, Ninja Turtles first, then Bob the Builder, then the other Ninja Turtle one, and finally Paw Patrol. As we put together the Paw Patrol puzzle, Payton pointed out a white dog, “Mom that’s Marshall. He’s a firefighter. I want to be a firefighter when I grow up.” I had to turn my head away from him, as I bursted into tears. I mumbled to him that I had to go potty and bolted to the bathroom. How was I supposed to tell my 7 year old son that he wasn’t going to grow up? That he would never have the chance to grow up and be a firefighter?

My husband spent most of his time that evening throwing up, completely, physically, sick over this news. He ended up going to the emergency department that night to get something to calm him down.

The doctors prescribed Payton steroids to help with his symptoms being caused by the tumor. Within just a few days, you’d never know he had a brain tumor that would kill him within a year. We were able to take him home for 6 days before he would start radiation therapy for 6 weeks.

Going home was bittersweet. We wanted to be home, but it all seemed more real when we got there. Family surrounded us with their love and support.

Our other 3 kids had missed us, and our youngest of the 3 didn’t know much at this point. How was I supposed to tell my 11 year old daughter that her baby brother was probably going to die? How would I tell her to spend as much time with him as possible, because we don’t know when it will happen? Talking to her was horrible. She was in shock, I saw the color drain from her face. I told her the truth, but also told her that we were going to pray for a miracle and that we would never give up hope. I told her that God would get us through, no matter what happened.

The community came together for our family. Payton had an unforgettable day with the Central Lake Fire Department, rode a pony, and spent his days home before radiation being treated like the prince he was. 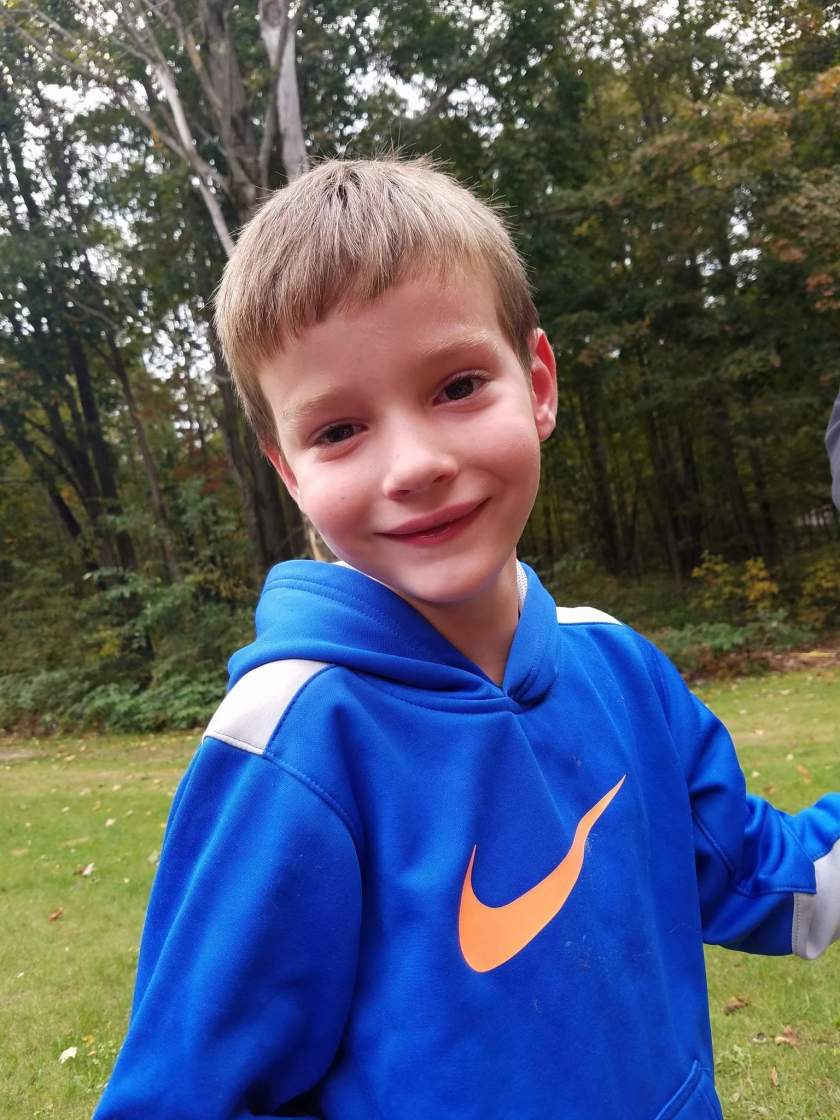