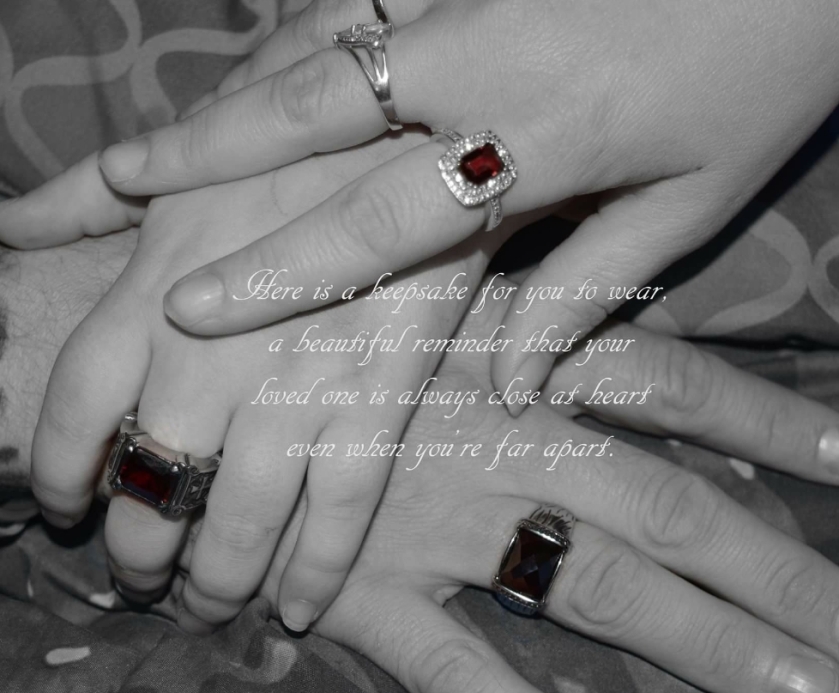 This is a story, a memory, that I have not shared with everyone. It is a very special memory that brings both heart break and warmth in my broken heart.

About 2 weeks before Payton passed away, I took all of the kids shopping. Payton needed clothes (again), as the steroids were causing him to outgrow everything very frequently. We were in TJMaxx when I saw a friend who stopped to chat. During this time, Payton had gotten out of my sight which I did not like because of his condition. I asked my daughter, Maddison, to go find him and hold his hand. She found him at the jewelry counter and soon they came back to me.

When we got home, he kept saying he needed his dad to take him to the store to get something for me that he had picked out. Payton hinted around for a few days, asking me my ring size and verifying he remembered it here and there so I had a feeling it was a ring but never told him I knew.

He had a love for online shopping and picked out a ring for his dad that matched the ruby ring Payton himself wore religiously.

Payton was shortly after admitted to the hospital and very sick.  We made the decision a week later to bring him home on hospice, to pass at home.  The day we left, he insisted we stop at the gift shop. I promised him we would.  As we walked through the shop filled with toys and trinkets, he meticulously picked out something for each of his cousins and 2 of his kid aunts. Upon checking out he said, “And I’ll take those socks too”, referring to the superhero ones I had pointed out when we had first walked in. I laughed and grabbed the socks.

The ride home was peaceful for Payton since we made sure he had Ativan right before we left the hospital .  My husband sat in back with our sweet boy and I drove. I cried most of the 2.5 hour drive home. We were taking our 7 year old son home to die.

When we pulled in the driveway and woke him up to tell him we were home, he was so upset.  “I wanted to go to the store!”, he cried. I felt horrible but I didn’t have the heart to tell him “You will never go into another store, ever”. We told him we needed to get settled in the house.

That whole day he didn’t stop talking about the store and how he needed to go get me something.  We talked him into looking at the TJMaxx website to see if he could find something.  My mom looked through pages upon pages with him, no luck. He was very adamant about getting me a certain ring. During his online shopping he did however find rings for his 3 siblings which he ordered. These rings came after Payton passed away.

Someone had the idea of sending someone to the store and letting Payton FaceTime them to find the ring he was looking for. So the next morning our oldest son’s went to TJMaxx and FaceTimed Payton.  He said no to all of the rings until he saw “the one”. His eyes lit u p and he excitedly pointed saying “THAT’S THE ONE!”. They bought and brought the ring home. I still had not seen it. Later Jason asked Payton if he wanted to give me my present. He said yes. Jason put the ring in Payton’s hand and I held my hand under his so he could easily drop it into my hand. The ring was beautiful. I cried and told Payton it was the most beautiful thing anyone has ever given me and thanked him like crazy.  It has a beautiful red stone, just like his favorite ring and the one he picked for his daddy.

Several of us have agreed that after he gave me the ring, his mission here was done.  He gave up the fight. He knew he had given each of us something tangible to hold on to in his memory.  I have never taken my ring off and I don’t plan to ever take it off. It still amazes me that even in his last hours, he was thinking of everyone else at just 7 years old.